Home › Films › Drama › The Master. A masterclass in the art of film making

The Master. A masterclass in the art of film making

Have you ever wondered what it would be like to be in a cult? To be taken in by a cult.

To be the leader of a cult?

Don’t worry. Cults are not something I spend a lot of time thinking about. Usually.  Nor do I think a lot about charisma, servitude and submission. How some people can get others to do what they want and actually enjoy doing it.

The Master is a film that explores the world of the cult – of the leader, the devotee, and the skeptics and how they need each other.  Written, directed and co-produced by Paul Thomas Anderson it was reputedly based on L. Ron Hubbard and the Church of Scientology and is set around the same era – 1950, Anderson however denies this link. 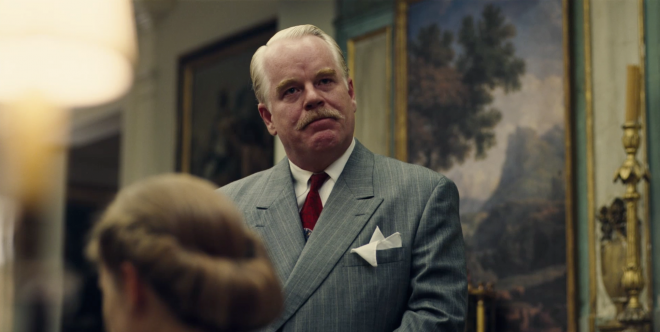 In the film we follow Freddy Quell (Joaquin Phoenix) – recently released from a military psychiatric hospital – an alcoholic drifter with sexual obsessions and poor impulse control. Freddy has two things going for him – a talent for making powerful moonshine and photography.

He tries to hold steady job as a department store photographer – but his erratic behavior gets him fired. He ends up picking cabbages with migrant workers where he is chased off the farm after one of the elderly workers gets sick drinking Freddy’s moonshine.

Wandering alone at night along the docks of San Francisco and appearing increasingly desperate Freddy chances upon the yacht of Lancaster Dodd (Philip Seymour Hoffman). Dodd’s daughter is getting married in front of perhaps 30 friends and family. Dodd is charming, commanding, entertaining and clearly The Big Man on Campus. Everyone defers to him.

Freddy Quell. So lost. So scary.

Freddy is discovered and bought before Dodd who takes an unusual and almost inexplicable liking to him. Freddy is violent and unpredictable – not the sort of type you’d want around your family and certainly not around your newly married daughter.

For his part Freddy has never quite met someone like Dodd before. They make quite an odd couple and bond over Freddy’s moonshine. Dodd the commanding, intellectual and wealthy patriarch bowing to Freddy’s mystical abilities to create this self-destructive brew.

They have the first of several intense and draining ‘processing sessions’ where Dodd questions Freddy in an unusual and personal manner. So Freddy – the erratic and possibly psychotic alcoholic becomes part of Dodd’s group – The Cause.

He and sets sail with them to the east coast where The Cause will advance their teachings based on Dodd’s book in in the homes of wealthy and well connected socialites who appear to be particularly partial to Dodd’s charm, ideas and intellect. Freddy’s presence at these gatherings is a most awkward contrast.

The Cause itself is a rag tag of true believers, lost souls drifting in Dodd’s wake and a few family members strung along with nothing better to do. Dodd’s wife Peggy (Amy Adams) is clearly a driving force and seems to have a hold on Dodd, whilst he has a hold over the others. Lancaster Dodd the charming and powerful extrovert supported behind the scenes by a fiercely determined wife, a portrait of Lady MacBeth if ever there was. Dodd is probably having sex with other females in The Cause and most likely with the various wealthy socialites who help fund the group. 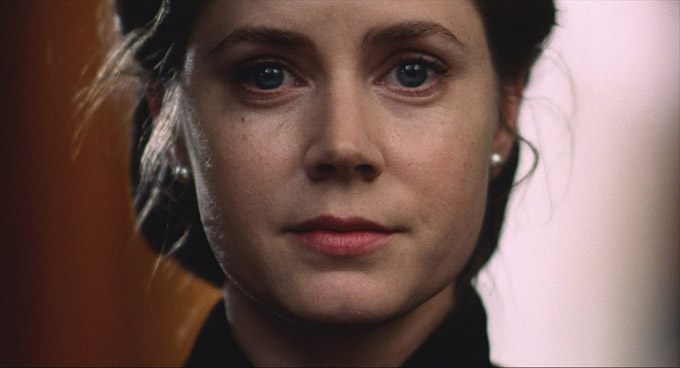 Meanwhile Freddy becomes more strongly attached to Dodd and assaults and threatens others who disagree with Dodd – inside and outside The Cause. The others fear him and he appears to be getting worse if anything.

Reality catches up with Dodd and he is arrested  for theft, fraud and practicing medicine without a license. Freddy is arrested as well and has a major argument with Dodd in the holding cells.

As Dodd launches his second book, cracks and strains in his credibility and consistency begin to appear and Dodd becomes ever more wily and prone to outbursts of sudden anger when questioned.

Freddy begins to drift away from Dodd and The Cause and attempts to pull the threads of his previous life together, by contacting a young girl who wrote to him while he was in the war. Nothing works out however.

Eventually Freddy and Dodd are re-united but they know their relationship has changed forever.

What is so interesting and compelling about this film is how different these two are, but how similar. They are both fantasists. Freddy incapable of dealing with the real world on any kind of successful terms, and Dodd who seems to transcend reality, bending the Real World and all who sail in her to his will. For a time.

This is absorbing and fascinating and could easily have been boring and pretentious if not for the nuanced script and the astonishing, almost powerhouse performances from Philip Seymour Hoffman and Joaquin Phoenix. Hoffman is so effortlessly commanding, engaging, thoughtful and inquisitive whilst advocating with utter conviction some of the weirdest ‘truths’. Phoenix is tightly coiled, like a weapon about to go off. The whole time. He is at once infantile and old beyond his years.

The supporting cast was perfect – providing a rich background for the two mains to absorb and reflect off. A wonderful example was Freddy’s young girlfriend Doris – a small role – and a spellbinding one. The cinematography and all other aspects of the film makers art were superb.

So good it made me want to join a cult. Or start my own 🙂

Author of The Reactionary Mind: Conservatism from Edmund Burke to Sarah Palin

LIFE IN MOTION AS A SINGLE HOT MESS MOMMA

My Reviews - Film and TV

No Place For Sheep

Dedicated to the support and promotion of Australian made films through independent news, reviews, features and interviews.

I watch a lot of films. And then I write about them.

this is... The Neighborhood

the Story within the Story

All About Film, TV, Music, Games, and Life

A blog for all things Australian